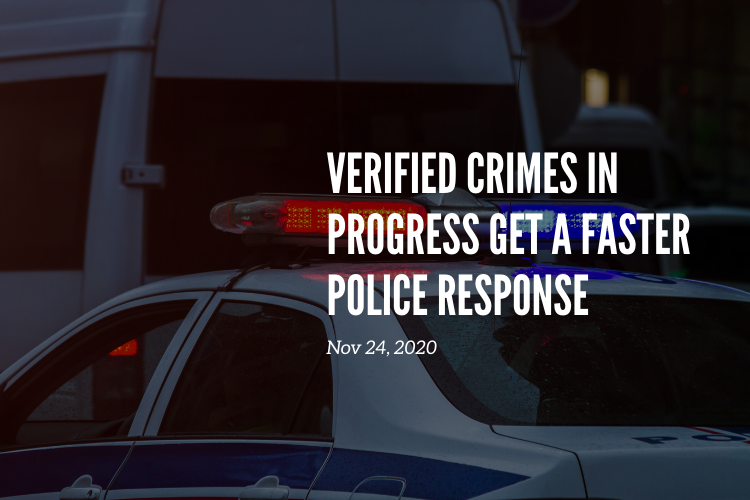 We are well on our way to breaking company records for 2020, and on track to reach our highest number of apprehensions ever, for a year-to-date total of 590 apprehensions. But what do these results mean, and how do they compare to other security alarm companies?

By speaking with law enforcement professionals we know that trespassers will repeatedly target businesses and job sites until they get caught by police. This is why our success as a company revolves around police contact with all suspicious persons.

What is an Apprehension Event?

An Apprehension Event is when police make contact with a trespasser or suspicious person. Many times, one apprehension event will result in more than one person being apprehended, depending on how many people were trespassing on customer sites. Apprehension is defined as; the action of arresting someone.

At one apprehension event, it is very likely to have more than one person who has attempted to break into a customer site. Each person who has been contacted by police after a successful dispatch is counted in our number of persons apprehended statistic.

What is the Current False Alarm Rate?

The false alarm rate is defined as an alarm incident where there is no evidence that an unauthorized entry or unlawful act has been attempted or made into, on or respecting a building, structure or premises. The average False Alarm Rate for the industry is approximately 98%. This number represents the volume of alarms that police respond to that are not an incident of trespassing or crime. As you can expect, this will lead to a slower response time to calls like these as dispatching officers are required to prioritize their responses. Radius Security's Redhanded product has a 1.4% False Alarm Rate, this means that we are sending police to a verified crime in progress 98.6% of all calls. The commitment of our Command Center team to verify there is a suspicious person on site has been part of our success in receiving a fast police response because law enforcement know they are responding to a crime in progress on Radius Security sites.

Kirk Roberts--who retired as a lieutenant in Texas with 32 years’ experience in law enforcement in Dallas-Fort Worth—explains how monitored video security systems help police officers do their jobs.

“Verifying a crime with live video greatly reduces or eliminates false alarms,” says Roberts, who is also a U.S. Army veteran and graduated from the FBI National Academy. When a Command Center, or monitoring station, can confirm a crime in progress, officers know they are not heading off on a wild goose chase. There are suspects to catch.

Police officers, Roberts adds, appreciate the co-operation and support from Command Center operators. “They stay on the phone throughout the event and provide copies of video footage and reports to aid in court prosecutions.”

“We can warn officers if an individual is armed with weapons or other harmful items,” says Roberts.

Because they don’t go in blind, officers can take appropriate steps if, for example, a robber is hiding behind a container with a gun.

The insurance industry estimates that each apprehension prevents and/or resolves 25-30 other crimes*. Roberts explains, “An apprehension deters the suspect, and perhaps others, from committing crimes where they were caught, and perhaps at other locations too.”

In other words, suspects, when caught, will think twice about returning, and they can’t commit more crimes if they’re in jail. Even if police were to release a trespasser, that person will be less likely to come back. A thief handcuffed and forced to return his loot will realize it isn’t worth it to try and steal again from that site or any other site that has remotely monitored video protection.

"Apprehended individuals," says Roberts, "are sometimes linked to other crimes or may be able to provide information on suspects who may be responsible for other crimes. A suspect may have an outstanding warrant or be already known to police. Once caught, she may become an informant and help solve other crimes."