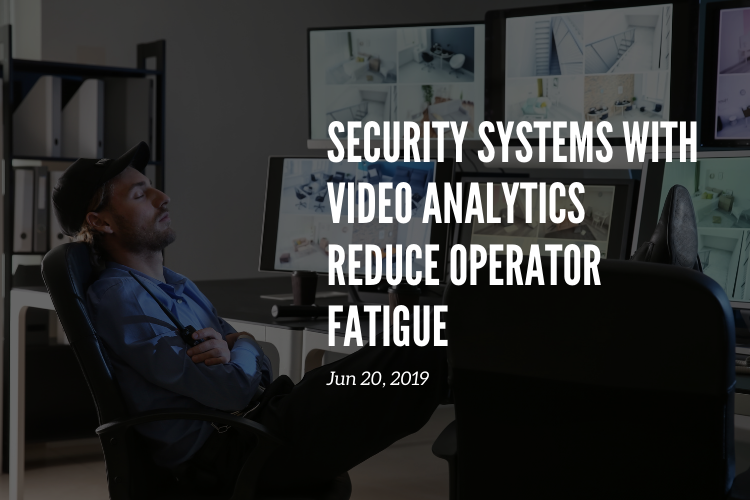 Imagine monitoring a wall of security video screens stretching the length of an entire room, fed by 350+ cameras. Your job would be to continuously scan a zone of 45+ cameras for suspicious activity for an entire shift. And conduct a virtual patrol via 20 camera feeds on your personal monitor. Radius Command Center Supervisor Sharon Flannery worked with such a system at a police station in the U.K.

“To say the job was draining is an understatement. To constantly watch cameras that may not even get any movement, or even those that were located in a town center, where you have hundreds of people walking around is hard on the eyes.”

Petra Kaczmarek, who works with Sharon in Radius’ Command Center as an incident investigation leader, agrees. “Scanning all the cameras for a 12 hr shift, can make one very tired, and dark shadows can easily be missed behind a dark object, bushes, distance of view, etc.”

Both Sharon and Petra agree that video-analytics-enabled security systems reduce stress and fatigue. With software in thousands of cameras continuously filtering video feeds, Command Center operators can focus on situations that require human expertise. Once an event-triggered camera issues an alarm, it instantly tracks the suspect’s movements. Then operators know where to direct PTZs to verify the alarm.

Jaysone Aston Moore, another team member, works in Command Center IT support. He appreciates being able to switch out accounts he monitors, to keep his approach fresh. “Our approach always keeps operators on their toes as they will approach every alarm like new. This goes a long way to prevent burn out and visual fatigue.”

He finds that security companies which rely on motion-activated alarms, and complex, customized procedures for individual situations must deal with constant false alarms and delayed responses on every dispatch. With Redhanded video analytics, he can direct specific cameras to ignore problem spots.

“Radius has developed a proven method that, when followed, maintains the highest level of security while also making it extremely easy for any operators to pinpoint the cause of an alarm,” says Jaysone. “By following our streamlined approach we could have a single operator keeping the same amount of sites secured as another company using 4 to 5 [times] as many people.”